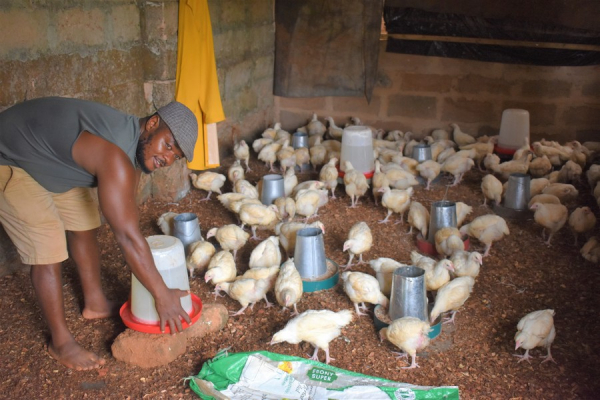 Endurance is seen tending to his birds in his farm.
Aghedo Endurance (34), from Oredo LGA in Edo State, Nigeria was the owner of a small poultry farm business he was running before he got the idea of traveling overseas for greener pasture and decided to sell his poultry to finance his travel to Europe.

In 2015, he eventually travelled to Italy in 2015 but returned alone in 2018, through deportation.
While in Italy, he lived in fear of the unknown, due to the fact that he had migrated irregularly, he was able to find job as a domestic worker, which paid him 600 Euros but he continued to live in fear and misery, knowing that he wasn’t there legally.
After he was deported back to Nigeria, he had no job or any source of livelihoods and was having difficulty feeding himself, until a friend referred him to Caritas Nigeria. When Caritas Nigeria conducted an assessment, it was discovered that Endurance still had a passion for poultry farming. Through the Stable Trained and Empowered Migrant (STEM) project, Caritas Nigeria was able to retrain him in poultry business and supported him with a start-up pack to begin his business with. He was also provided with some cash support which he put together with his personal savings to build a battery cage for the birds.
During a discussion with the STEM project team he noted that the intervention has made a huge difference in his life, he stated, “today, I own a poultry of mine again.  I am fulfilled, as my dream of becoming an established poultry farmer is a reality. I can’t thank Caritas and GIZ enough for making me fulfill my dreams”.
Some of his birds are grown and ready for sale. Endurance has already started making plans to sell and restock as soon as possible in preparation for the festive season in December, when sales will be higher. He hopes that the COVID-19 pandemic doesn’t hamper those plans. His farm is located in his home at No.16, Iguma Street, off Ohen Road, off Sapele Road, Benin City, Ikpoba-Okha LGA of Edo State, Nigeria.

More in this category: « Hope restored for Libya returnee migrant Sustainable Empowerment for Macpaul »
back to top