A second chance for Friday 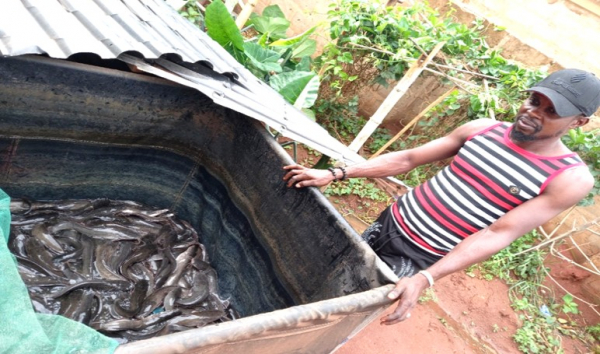 Friday unveils the yield of his enterprise
Ighile Friday Eghosasere, a forty-one-year-old indigene of Uhumwonde Local Government Area (LGA) of Edo State has also benefitted largely from this intervention. Shortly after completing his secondary education in 1996, Friday moved out of his parents’ house to learn video editing as he could not further to tertiary level due to paucity of funds.

Before long, he began to earn a living off video editing and then, started his own family. Over time, his finances were threatened and life became quite tough on him and his young family.

In a bid to achieve a more stable and improved livelihood, the father of four raised some funds from his occupation and set out for Italy through Libya by land in 2017. His plans, however, were aborted in Libya as he could not proceed further to his intended destination. In Libya, he endured a hard time, although he worked in a construction company where he earned about 500 dinars weekly. Seeing no improvement in his living conditions, he willingly sought the aid of the International Organization for Migration (IOM) to return to Nigeria.

Two years after he returned to his motherland in 2018, Friday was referred by a friend to Caritas Nigeria for livelihood support through the GIZ-funded project. Like Benson, he was admitted to the fish farming component of the project, and was empowered with the skills and requisite pisciculture business start-up tools, such as juvenile fish, tarpaulin pond, fish feed, supplements and cash support of NGN20,000.

Since establishment, Friday’s trade has continued to yield impressive results; over 400 mature fish were sighted in his pond when Caritas Nigeria team visited his site during a project monitoring tour. The restored project participant, who could not hold back his joy, revealed his plans of expanding his enterprise and network of clients beyond his locality. The timely intervention of the GIZ project implemented by Caritas Nigeria strengthened the economy of his household, he admitted.

More in this category: « Empowered and Stable Charles Hope rekindled for Ejiro »
back to top