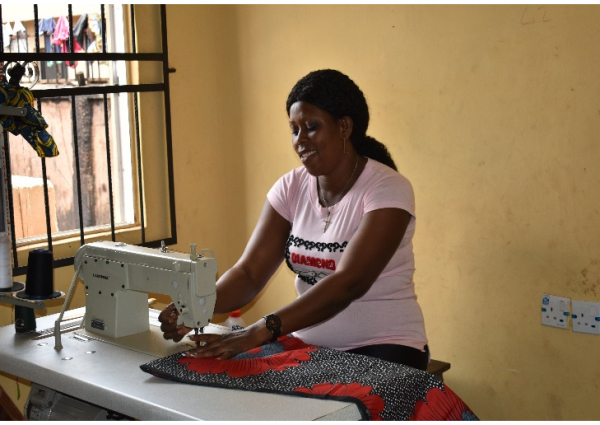 Dinoba Austine, is 33 years old and hails from Ovia N/East of Edo State in Nigeria. After her Primary School education, she decided not to proceed to Secondary (High School) but began the business of petty trading, to enable her support her family, whose financial background was really poor. 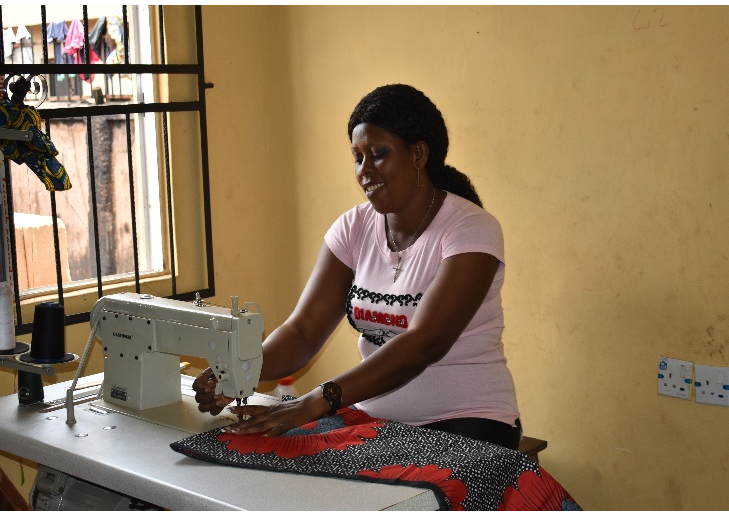 In 2018, Dinoba was convinced by some friends that she could get a better life if she is able to travel overseas. So, she decided to travel to Libya in a bid to migrate to Europe through the Libya route, with the hope of searching for greener pasture overseas, to better her life and those of her loved ones back in Nigeria.
However, Dinoba returned back to Nigeria in 2019, with no money, no job. As a result, she had difficulty feeding herself and was also unable to afford her basic needs. Life became really difficult for her and especially because she was also saddled with the responsibility of fending for her younger ones and the rest of her immediate family.
Dinoba had always silently nursed the ambition of becoming a Fashion Designer but never had the opportunity to pursue her dream because she couldn’t afford to pay the fees for the training, neither did she see any hope of her being able to set up the business after acquiring the skills. Nonetheless, her story changed when she was referred to Caritas Nigeria by other returnees who were already receiving support from Caritas Nigeria as beneficiaries of the Stable Trained and Empowered Migrant (STEM) project.
In March, 2020, Dinoba began her training in fashion and designing which lasted for a period of 3 months. At the end of her training, she was provided with a start-up pack which included; an industrial sewing machine, a generator set, sewing kit and a shop with the rent paid for a period of up to 6 months. Her tailoring shop is located at No. 22, Textile Mill Road, off Chrismerry Stores, Benin City (Oredo Local Government Area).
In her own words she has this to say, “I can now work at my pace, as my own boss. I can take care of my brothers and sisters with the proceeds from my business. If not for Caritas, I would still be on the streets. Thank you GIZ, thank you Caritas Nigeria.” As for Dinoba, this is a dream come because she is now able to actualize her dream of becoming a fashion designer, who is able to provide for herself and family.

Omozogie Charles is a 34-year-old man from Uhumwonde Local Government Area (LGA) in Edo State, Nigeria. He is married with 3 children and has been barely managing to make ends meet and feed his family. 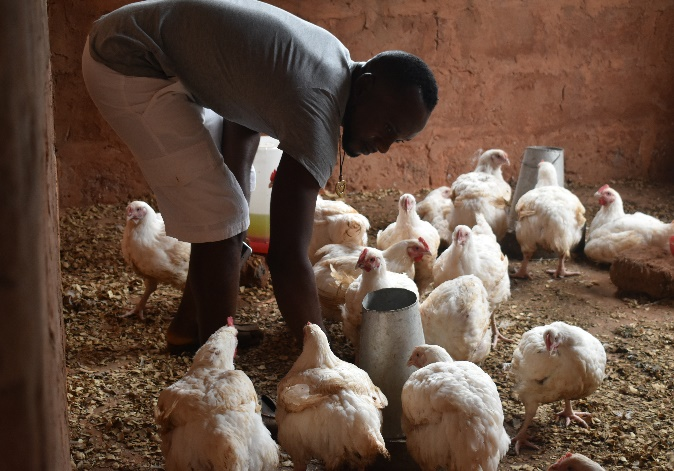 In 2016, he attempted to travel to Europe with the hope of a greener pasture overseas. He had gone through Libya, to use this route by land into Europe but was unsuccessful. Afterwards, he remained in Libya for about 2 years, where he worked as a manual labourer, doing menial jobs and earning an equivalent of N5,000 (less than $15) monthly. A pay which was not received consistently, since it wasn’t a permanent job, he also wasn’t receiving any other form of support. At some point, Charles was sick with pneumonia and was struggling to treat himself from his merge earnings.

In 2018, Charles returned alone from Libya back to Nigeria, with the help of the International Organization for Migration (IOM). Upon his return, he had no money saved and no job to do in Nigeria, he has basically been idle while nursing the ambition for another attempt to move outside the shores of the country.
Fortunately for Charles, his friend told him about the Stable Trained and Empowered Migrant (STEM) project and he was introduced to the project team where after his assessment, he indicated interest in starting a poultry farming business. He was subsequently enrolled for training in poultry which lasted for one week. At the end of his training, Charles was empowered with a startup pack which includes; 60 birds, feeds, vaccines, as well as feeders and drinkers. In addition to the startup pack presented to him, a cash transfers of N20,000 (about $60), was given to him for logistics support, to transport the birds and to fix the space in his house where he would keep the birds. 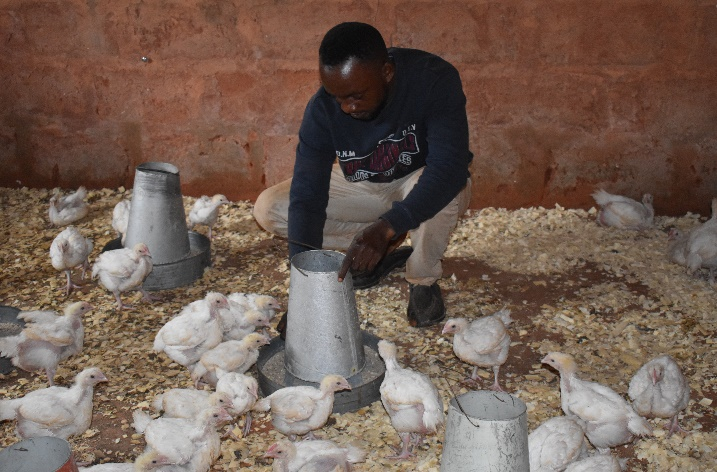 Two months after Charles set up his poultry farm, the first set of his birds have grown and ready for sale. He has been able to sell 21 birds from the farm and realized a profit of N101,000 (about $285). He is making plans to restock his farm in view of the coming festive season when chicken will be in high demand, after which he plans to expand and build a very successful poultry business. Charles is now able to cater for himself and his family. His poultry farm is located in his house at No 15, Upper Extension, Ekpoma, Esan West Local Government Area in Edo State Nigeria.

Charles is pictured on the first picture (Top left) tending to his birds in his poultry, in Uhumwonde Local Government Area (LGA) of Edo State, Nigeria.
The second picture above (top right) shows his 2-week old chicks, after he had just set up his poultry and when he started making sales. Photo credits: Emmanuel Nnacho, Caritas Nigeria.

32-year-old Ebhohimen Macpaul, hails from Ubiaja in Esan South East Local Government Area (LGA) of Edo State, Nigeria. He lives with his mother, who is a petty trader in the community. After completing his Secondary (High school) education, he was unable to proceed to the University due to financial challenges, he then became resolute to travel overseas to enable him make a living for himself and support his family. 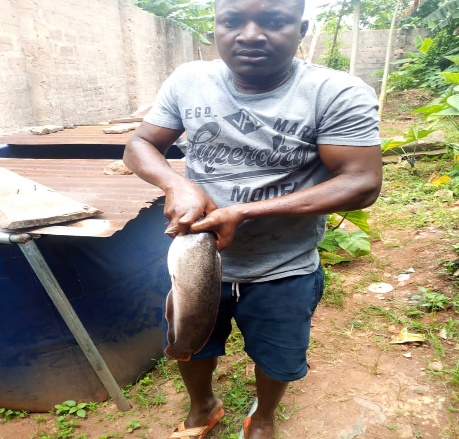 He was identified by the Caritas Nigeria Stable Trained and Empowered Migrant (STEM) project team, counseled and trained in fish farming to enable him acquire a source of livelihoods. He was provided with the startup pack after his training in fish farming and has established his business. His first sale of the fishes harvested, earned him N172,000 (about $480) from the sales of over 150 fishes.
Although the COVID-19 pandemic has affected patronage slightly but that has not deterred him from also planning to expand his business to include a Grilled Fish spot to attract more customers and increase his income. He is also keeping some of the fishes for hatchery, while producing over 1,000 fingerlings for sale too.
Macpaul is grateful to Caritas and her funder GIZ for providing him with this opportunity which has empowered him and created stability in his life, as he is now able to support his mum and siblings. His fish ponds are located at 28, Otamere Street, off 2nd East Circular Road in Benin City, Ikpoba-Okha LGA of Edo State, Nigeria. 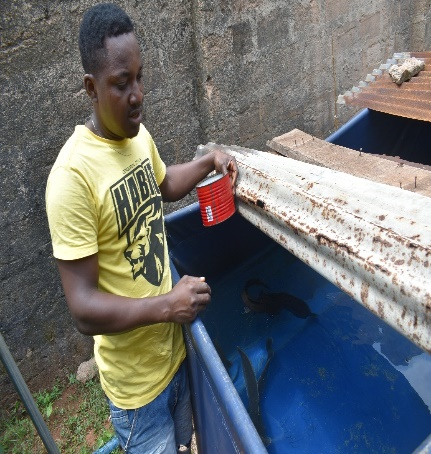 Macpaul inspecting his hatchery and fingerlings.

Aghedo Endurance is 34 years old, from Oredo LGA in Edo State, Nigeria. He was owner of a small poultry farm business that he was running before he got the idea of traveling overseas for greener pasture. He decided to sell his poultry in order to finance his travel to Europe. In 2015, he eventually travelled to Italy in 2015 but returned alone in 2018, through deportation.
While in Italy, he lived in fear of the unknown, due to the fact that he had migrated irregularly, he was able to find job as a domestic worker, which paid him 600 Euros but he continued to live in fear and misery, knowing that he wasn’t there legally.
After he was deported back to Nigeria, he had no job or any source of livelihoods and was having difficulty feeding himself, until a friend referred him to Caritas Nigeria. When Caritas Nigeria conducted an assessment, it was discovered that Endurance still had a passion for poultry farming. Through the Stable Trained and Empowered Migrant (STEM) project, Caritas Nigeria was able to retrain him in poultry business and supported him with a start-up pack to begin his business with. He was also provided with some cash support which he put together with his personal savings to build a battery cage for the birds.
During a discussion with the STEM project team he noted that the intervention has made a huge difference in his life, he stated, “today, I own a poultry of mine again.  I am fulfilled, as my dream of becoming an established poultry farmer is a reality. I can’t thank Caritas and GIZ enough for making me fulfill my dreams”.
Some of his birds are grown and ready for sale. Endurance has already started making plans to sell and restock as soon as possible in preparation for the festive season in December, when sales will be higher. He hopes that the COVID-19 pandemic doesn’t hamper those plans. His farm is located in his home at No.16, Iguma Street, off Ohen Road, off Sapele Road, Benin City, Ikpoba-Okha LGA of Edo State, Nigeria. 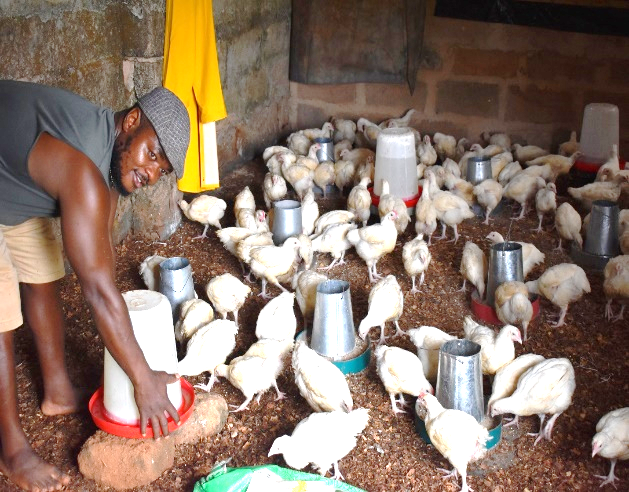 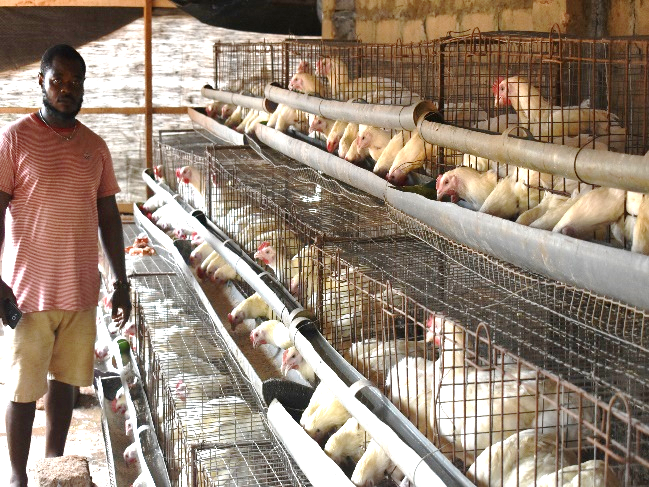 Endurance is seen tending to his birds in his farm.

More in this category: « Libya migrant returnee empowered Returnee migrant empowered and contented with barbing business »
back to top